Things are not looking particularly bright for AMD if we are to take into account the latest rumors surrounding the company’s much-anticipated Radeon RX Vega. The latest purported results of the HBM2-powered graphics card makes things look even bleaker for the company as it fought and barely managed to edge out NVIDIA’s GeForce GTX 1070 in 3DMark TimeSpy.

Apparently, the tests on Radeon RX Vega were run using a system powered by AMD’s much applauded Ryzen 7 1800X processor. As you can see below, the system scored 5,950. Compared to that the NVIDIA GeForce GTX came unexpectedly close to the RX Vega by scoring 5,703. The GeForce GTX 1080 scored 6,709 while the GTX 1080 Ti pushed all the way to 8,312. 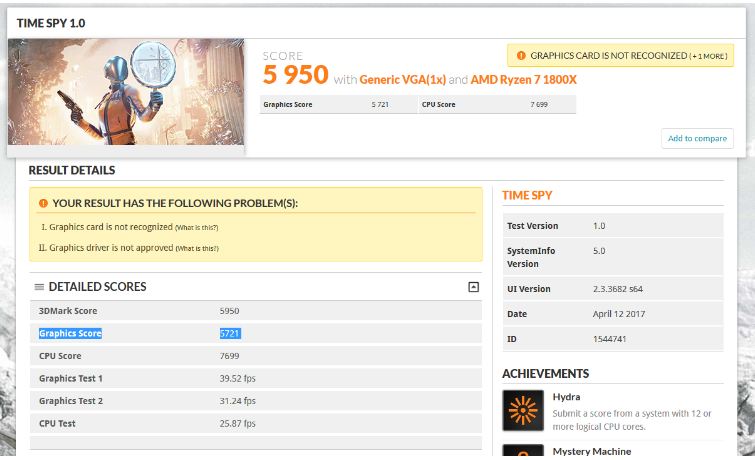 It looks like AMD’s forthcoming Radeon RX Vega chip will have a base clock speed of 1 GHz and boost clock speed of 1.2 GHz — in the reference models, at least. Other key specs include 8GB of HBM2 fetching 512 Gbps of memory bandwidth. The TDP rating stands at 225W.

Needless to say, if these results are indeed factually accurate, Vega won’t be the GTX 1080 killer as many earlier rumors had predicted (let alone taking on the higher-end GTX 1080 Ti).

However, having stated that, it is also possible that the chip is currently under delivering, and will offer a much higher output with tuned drivers and final hardware.

Another interesting aspect is that AMD could be planning on several Vega graphics card. If that’s the case, then perhaps the card used in the aforementioned comparative analysis was actually the GTX 1070 competitor. Then we might see more RX Vega cards with all the might to take on the GTX 1080 and GTX 1080 Ti.