We finally have a good look at the first ever AMD Radeon RX 580 overclocking performance benchmarks. The leaked info allows a pretty good sneak peek into the rather impressively refined Polaris GPU architecture’s ability to accommodate high overclocks.

The XFX Radeon RX 580 that comes with a reference design is the actual card that underwent the test. The overclocker made use of a customized water block to facilitate the liquid cooling setup while performing the benchmarks. (Because of that setup, we shouldn’t really expect excessive overheating.)

The reference card draws power from a single 8-pin connector, enabling itself to deliver more power to the GPU and the electrical circuitry. Note that the previous-generation reference Radeon RX 480 cards needed to draw power from the PCI-e connectors as the single 6-pin connector could not draw enough juice to power the GPU. This eventually led to the PCI-e slots slowly dying out and/or taking a toll on the motherboard itself. This unacceptable issue later compelled AMD to roll out a new driver to lower the power draw of the Polaris 10-powered cards.

The AMD Radeon RX 580 graphics card will come with a Polaris 10 GPU with a higher clock speed. It’s called the Polaris 20 XTX and resembles a number of custom variants of the Radeon RX 480 currently available in the market. 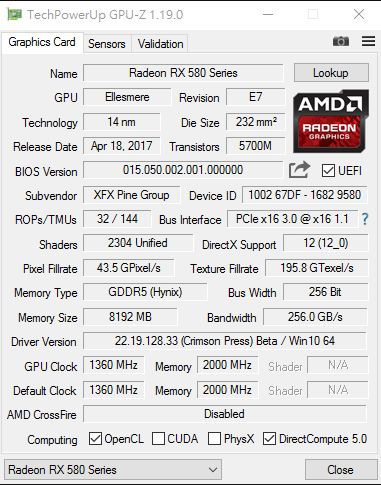 The output bandwidth stands at 256 Gbps. With the reference model sporting a single 8-pin connector, we may as well look to find an 8+8 or 8+6 configuration on the custom variants. As for the price, the Radeon RX 580 should cost you by and large the same as the custom Radeon RX 480 cards, which is around $229 to $279.

As the overclocker ran the tests, the Radeon WattMan overclocking utility came across several issues. For example, increasing the power limit led to some serious glitches, forcing him crank up the GPU voltage.

However doing so led to the GPU being affected by the infamous power bug that lends a hand in boosting the clock speed, albeit at the cost of the overall performance. The peak stable overclock was achieved at 1480 MHz with +12mV.