It looks like Lenovo made a mistake by posting about the new Lenovo Y520 on its website. Lenovo has unknowingly leaked the yet unreleased RX 500 series graphics card. The description for the laptop clearly gives away the new graphics card that’s featured in the laptop – AMD Radeon RX-560M 4GB chip. The Lenovo Y520 features the latest generation of processors – up to a 7th Gen Intel Core i7 CPU offering a 12% increase in productivity compared to previous processors and a 19% increase in web performance via a dedicated media engine. The laptop sports next-generation graphics including the recently unveiled Nvidia GeForce GTX 1050, Nvidia GeForce GTX 1050 Ti. What gave away the information was Lenovo adding “AMD Radeon RX-560M, all up to 4GB” to the description.

Reports are hinting at Radeon RX 560M being a rebrand of the existing Radeon RX 460M. Or AMD may go ahead and use a faster Polaris 11 GPU inside the leaked Radeon RX 560M. Or it could be based on the new Polaris 12, which is faster and more efficient.

What do you think about the new Radeon RX 560M? Let us know your thoughts in the comments section. 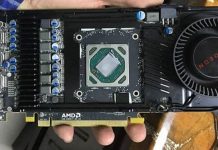