AMD Radeon RX 480 is the hot topic of discussion right now in the gaming industry and the card is especially in talks due to its low price tag. After some very important RX 480 leaks yesterday, some RX 480 listings showed up online, suggesting that the release is near. Today, a new series of leaks regarding the graphics card have come up. 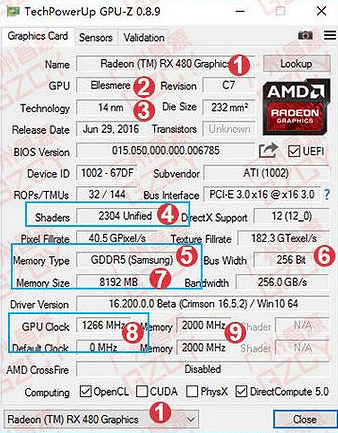 First up is the screenshot of Polaris-supported GPU-Z 0.8.9 posted on Taobao. The image seems real, as the specs revealed in it have already been confirmed recently.  The AMD Radeon RX 480 comes with 2304 Stream Processors, 32 ROPs, and 144 TMUs (Texture Mapping Units). Of course, Fiji and Hawaii offer double the ROPs, but we are yet to know its impact on the gaming performance. Note that the GPU is named as Ellesmere.

The second exciting news today is that a new video has been posted on YouTube that shows Overwatch gameplay on the Radeon RX 480. Posted by Hardware Unboxed, an Australian channel, this is the first RX 480 gameplay by a reviewer. You can watch the video below.

Do you remember the picture allegedly showing RX 480 being transported on production line? Back then we were unsure what card that is, but it is no longer a secret. Those cards are XFX Radeon RX 480 Black Edition, which are equipped with a custom backplate. XFX also has Core Edition incoming, which from what I read, won’t have such a fancy backplate.

Lastly, there’s a YouTube channel that claims to have recorded Witch 3 gameplay with Sapphire RX 480 8GB. The game was played on Intel i5-6400 CPU at 1080p. We can’t confirm whether or not this leak is genuine.

Radeon RX 480 Has A Good Overclock Potential, Retailers Are Ready For Sale