MobiPicker
Deals Amazon “Great Indian Sale” Commencing on Jan 20: The 3 Days Of...
Share on Facebook
Tweet on Twitter
Deal Alert: 49% Off on ExpressVPN
Touted as #1 VPN in the world, ExpressVPN is now offering 49% off & an additional 3-months of service on its annual plans.

The first big online sale for 2017 is here, as Amazon India announces the return of “Great Indian Sale” on January 20. The Great Indian Sale by Amazon will last for 3 days, from 20th Jan to 22nd Jan. There will be discounts, cashback offers and much more for the users of the online retail website. 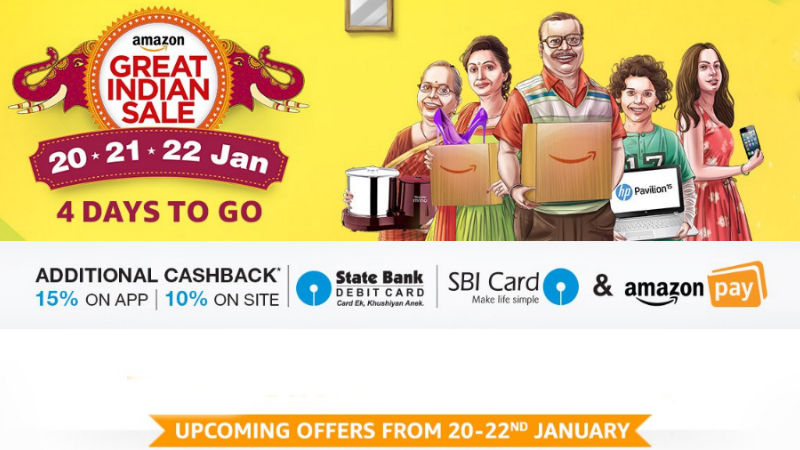 This being the very first sale for 2017, Amazon is going all in. The retailing giant will be providing deals and discounts on consumer electronics, home, kitchen, daily essentials, and fashion categories. For banking discounts, Amazon has tied up with SBI (State Bank of India) to offer cashback on purchases beyond Rs. 4,999. Under the scheme, users will get 15 percent cash back (maximum Rs. 1,750) on app purchases and 10 percent cash back on website purchases with SBI debit and credit cards.

Apart from the above offers, the Prime members of the Amazon website will have few more goodies up their sleeve. The company will be holding Prime-only deals along with early access to top deals 30 minutes before non-Prime members. Furthermore, Amazon has also tied up with Musafir.com to send 10 lucky app-buying couples for an all-expense paid trip to Europe. Also, 10 lucky users stand a chance to win one Renault Kwid car each.

To ensure smooth deliveries, Amazon has created 7,500 temporary jobs for this sale only. Hence, one can assume this to be a great saving fest. As for the deals on particular models are concerned, Amazon has kept everything secret.

In case, you have something on your wishlist, be ready with your Amazon Pay wallet and SBI cards.