AlphaGo, an AI program developed by Google’s DeepMind unit was beaten by world’s greatest Go player couple of days ago.

Lee Se-Dol, the 33-year-old South Korean is playing against AlphaGo in the $1 million five-game series. The results aren’t astounding for Se-Dol, as the AlphaGo leads with 3-1 on the result sheet. 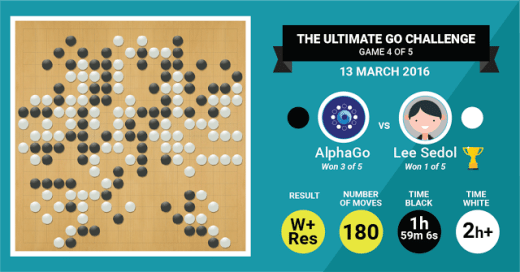 This is not the first time machines are getting better of humans. In fact, way back in 1977, Gary Kasparov was humbled by IBM’s Deep Blue at the game of chess.

Then, why suddenly we care about this matter? After Deep Blue’s victory, it was quickly dispensed with no real attribution to AI or anything.

But, there are a handful of reasons why the tech community is intrigued by the implications for AlphaGo.

Deep Blue was mainly developed for playing chess. It had only one purpose of calculating and processing the 10 to the power of 120 possible moves in the game.

In the case of AlphaGo, the AI program is designed to use different types of programs in harmony to help it deal with the trillions upon trillions of different outcomes involved in playing Go.

AlphaGo takes a new approach to learning. It remembers and improve with each game played in the virtual environment. This doesn’t necessarily mean that AlphaGo will learn new things like rock climbing on its own, but the development of the intelligence required to beat Lee Se-Dol has come about quicker than we’ve expected.

The ability to play games is a crucial measure of how far AI has come. It shows that machine can execute an “intellectual” task better than humans. The unique thing about Google’s AI program is its ability to teach itself by playing the game (against itself) millions of times over and over to learn its weakness and correcting them. AlphaGo has gone from an amateur player to world champion in less than a year.

“AI methods are progressing much faster than expected, (which) makes the question of the long-term outcome more urgent, In order to ensure that increasingly powerful AI systems remain completely under human control… there is a lot of work to do,” said AI expert Stuart Russell of the University of California’s Berkeley electrical engineering & computer sciences department.

Even, renowned scholar, Stephen Hawking says that the pace at which machines are learning should be cause for concern. He’s even said that there could be an unexpected AI takeover.

Richard Sutton, the computer scientist believed people need not panic, but definitely, pay attention to the scheme of things.

While Lee Se-Dol still recovers from his losses, the rest of the world should start paying attention to the rise of machines.