During October, NASA’s Kepler Space Telescope used for spotting of exoplanets, found something peculiar. One star, dubbed KIC 8462852, showed strange light patterns. At first, scientists thought the star may have some large objects orbiting around it since the star’s light gets dimmed in an unusual way. Although dimming could’ve been explained with artificial structures (like a giant Dyson sphere), experts now think something else may explain star’s strange behavior.

Kepler Space Telescope hunts for exoplanets by measuring light emitted from stars. When a planet passes in front of the star its light gets dimmer (for around 1 percent, or less). The problem with KIC 8462852 is that light emitted from the star can dim for a massive 22 percent.

Dips in light so large could mean that some huge object orbits the star, dimming its light when passing in front of it. Some scientists even proposed that an alien megastructure can be responsible for huge drops in the observable light.

It seems aliens are not to blame since a new study proposes a much less radical explanation for the star’s dimming. A study, published in the journal Physical Review Letters, proposes a theory of which the star is responsible for huge changes in the amount of observable light.

Researchers proposed the star is going through an internal phase transition, characterized by huge outbursts of light followed by periods of reduced brightness. They came to the conclusion by using mathematical models called avalanche statistics. By analyzing the relationship between the large and small drops in brightness, scientists came up with regular patterns that appear in avalanche statistics, which deals with things going with certain phase transitions.

Karin Dahmen, a lead researcher from the University of Illinois, explained that “The small events in our star analysis would be like the little crackles while the large events would be the analogue of the big snap,” like when brittle materials deform over time, with little cracks appearing. Over time, cracklings will deform material so much, it will just break in one big snap.

Like a brittle material, the star may also approach a critical point in its phase transition. Further research may explain what transition the star is going through. The study concluded: “Scaling collapses suggest that this star may be near a nonequilibrium critical point. The large events are interpreted as avalanches marked by modified dynamics, limited by the system size, and not within the scaling regime.” 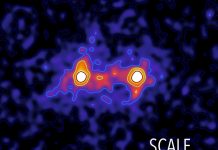