MobiPicker
News After HTC, OPPO making an iPhone 6 Plus
Share on Facebook
Tweet on Twitter
Deal Alert: 49% Off on ExpressVPN
Touted as #1 VPN in the world, ExpressVPN is now offering 49% off & an additional 3-months of service on its annual plans.

Oppo Electronics, the China-based smartphone manufacturer has broken several records in the industry since 2008 by introducing innovations in smartphones and offering a tough competition to big smartphone makers. It launched the Finder, thinnest smartphone at its time, Find 5 – Full 1080P HD Smartphone and the N1 and N3 with never imagined rotating and motorized cameras. The company possess its own brand in rapid-charging VOOC.

Earning a big reputation in the smartphone industry Oppo seemed to ruin it by playing wrong with its rumored upcoming set. The latest leaks of the new handset from Oppo clearly marks its resemblance with the iPhone 6 Plus. 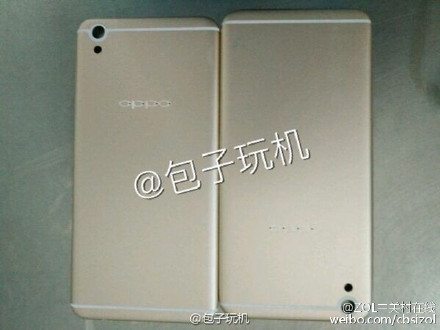 The handset features a unibody metal design with camera lens positioned exactly the same as iPhone 6 Plus. The 3.5 mm headphone jack, the charging port as well as the speaker grill is positioned at the bottom just like the iPhone has it. The rounded edges and curves too match the iPhone 6 Plus. The only difference we can make out from leaked pics is the respective position of camera flash below the lens. The design team at Oppo has terribly copied the iPhone 6 Plus and the intentions behind the same aren’t yet clear.

Even companies like HTC too feel like manufacturing an iPhone when it comes to build part which HTC has cleared on its part by flaky copying the same iPhone 6 Plus on HTC One A9. One thing which can be safely concluded out of this is the marketing methodology of companies for capturing the lower end market by offering an otherwise unaffordable iPhone build and looks.