It is no news that the Adobe Flash Player keeps facing a lot of security issues and Adobe desperately tries to clear them up with regular updates. This is why it isn’t surprising to know that the all the positions on the list of the Top 10 of most popular targeted vulnerabilities in 2015 (using exploit kits) were filled by the Flash Player. The list has been released by the Japan’s largest telecom operator NTT Group’s security department in Japan. 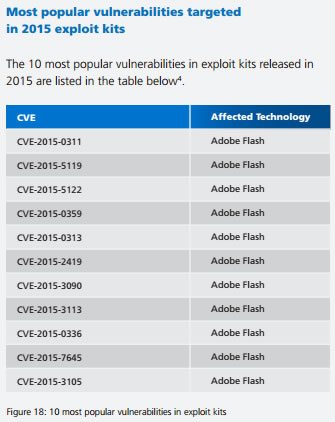 Previously ruled by Java leaks, the Top 10 list is now dominated by the Adobe Flash Player. This means that cybercriminals are now targeting Flash Player while Java has got very less vulnerabilities that are attacked by the hackers. Meanwhile, the figures for the Internet Explorer are almost the same as they were before.

NTT says that many companies are still using Java systems that are unpatched and contain vulnerabilities. However, no new Java exploits were attacked last year by exploit kits (unpatched software). Hackers mostly use malicious ads or hacked sites to distribute unpatched software to the users. Internet Explorer is still a target because it has got many new vulnerabilities and many companies use older Windows versions that have the IE set as the default browser.

In order to prevent getting attacked by exploit kits, NTT says that users might use an adblocker and might install the latest updates for all these vulnerable software.