MobiPicker
News 47,440 Units of Lenovo K3 Note Sold Out in Just 5.2 Seconds...
Share on Facebook
Tweet on Twitter
Deal Alert: 49% Off on ExpressVPN
Touted as #1 VPN in the world, ExpressVPN is now offering 49% off & an additional 3-months of service on its annual plans.

The Lenovo K3 Note, which was launched in India later last month, went on its first flash sale today via domestic online retailer Flipkart. It was reported that a total of 5 Lakh registrations were recorded for the sale. According to latest tweet from Lenovo India, K3 Note sale was killer, which sold 47,440 units in just 5.2 seconds. 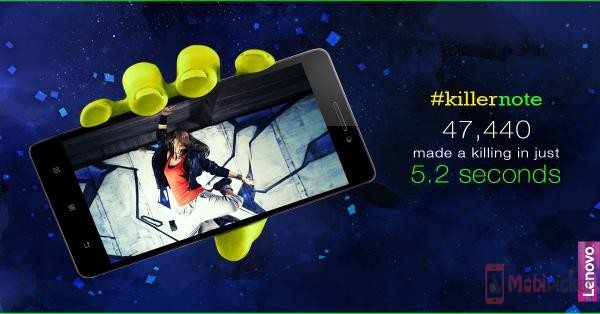 Specs-wise, the Lenovo K3 Note sports a 5.5-inch display, and is powered by a 1.7GHz octa-core MediaTek MT6752 processor. A 2GB of RAM, and Mali-T760 MP2 GPU helps smooth processing of the Note.  There is a 13 megapixel rear camera, a 5 megapixel selfie camera, 16GB expandable internal storage, and a 3,000mAh battery.

Those could not manage to purchase a unit, the second flash sale will take place on next week and registrations for the same are now up. Here it is worth mentioning that Lenovo K3 Note is the most affordable handset with 1080p resolution available in India for the price of Rs. 9,999. So, if you are searching for a new handset, you should check out its features at least.