The study, which got published in Science, was a result of a decade of monitoring insect migration. Results show that trillions of high-flying insects (capable of reaching over 492 feet/150 meters in the air and weighing at least 10mg) fly over the UK each year to migrate.

Researchers explained that 3.5 trillion flying bugs can be seen in the skies of southern England, the mass equals to 3,200 tons – over seven times larger than the mass of 30 million songbirds when they migrate from the UK to Africa each autumn. 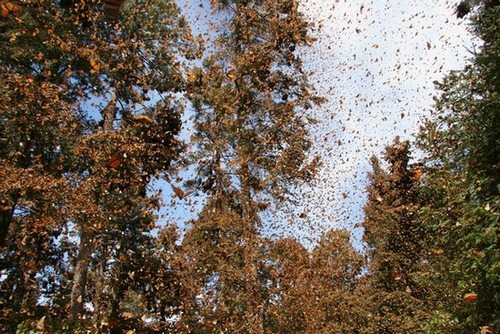 Study author Jason Chapman stated that the annual insect movement represents the largest and most important yearly animal migration occurring in land ecosystems. He said that “Insect bodies are rich in nutrients and the importance of these movements is underappreciated.”

Although researchers managed to calculate the number of insects migrating each year over England, they weren’t able to record their travel routes. The data gathered points to a general area over the UK, including the North Sea and the English Channel. Regarding general course of migrations, insects are heading to the north during spring and towards south when autumn comes. Although seasonal figures vary, the general route is towards north during the springtime and south during fall.

The migrating insects serve many roles; they provide lots of ecological services such as pollination, crop pests predation and providing food sources for bats and birds. Since the annual insect migration is highly sensitive to climate conditions and yearly changes, it can be an important indicator, showing the general state of the environment, year over year. Ka Lim, a co-author of the study said that “Global climatic change could cause decline of many species, but equally other highly adaptable species thrive and become agricultural crop pests.”

This was the first large study that managed to discover the sheer size of the annual insect migration. And although the data is valid just for the UK area, the study is very important for the understanding of insect’s annual migrations.