General Motors Co has begun the production of 2017 Chevrolet EV Bolt electric cars at a facility north of Detroit. Things are moving forward as per plan the company will be delivering the vehicles by the fall of 2016 as promised, company officials confirmed on Friday. It is not yet clear how many dealers across the country will be selling the Bolt.

According to a Reuter report,  the total production capacity at the Orion Assembly Plant in Michigan where the Bolt EV is built stands at 90,000 a year.

Barring any unanticipated turn of events in the coming weeks, GM will be the first company in the world to offer an electric car with more than 200 miles of driving range with a starting price of less than $40,000 before tax credits. (It’s rated by the EPA at 238 miles combined).

Tesla Motors, GM’s rival in the electric car segment, had announced earlier that its forthcoming Tesla Model 3 will launch in 2017. Interestingly, the Model 3 and the Bolt represent two completely contrasting strategies for pushing electric cars into America’s mainstream auto market.

At the moment, it seems Bolt will enjoy a clear advantage over Tesla in terms of servicing and maintenance as it has a lot wider network spread throughout the country. Compared to that, Tesla is yet to have its first service center in many states.

However, the Bolt won’t have access to as many charging networks as you would probably like. Although, that status quo may soon change for the better with increasing government support. 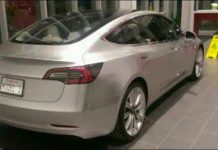