Xiaomi Mi power banks are quite popular amongst smartphone users. The 10,000 mAh power bank by Xiaomi was a hit, thanks to its slim design and premium looks. The company was also rumored to be readying a huge 20,000mAh Mi power bank. Well, the good news is that it has been launched today! 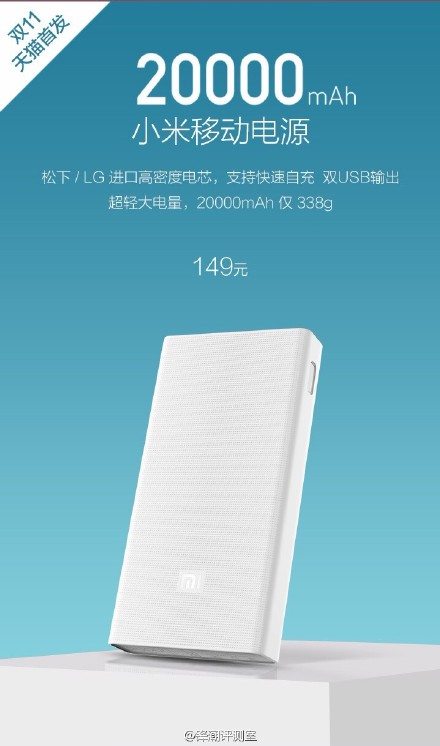 The 20,000mAh Mi power bank is made up of six 3350mAh high-capacity cells from LG/Panasonic. The power bank weighs 338g, around 88g more than the 10,400mAh Mi power bank, which is obviously due to the increase in capacity. Thankfully, the 20,000mAh power bank remains slim and compact like it predecessors, thus allowing it to be easily portable. The new power bank supports Quick Charge 2.0 by Qualcomm, and it is being said that the power bank can be fully charged in 5 hours only! Though no more details are known, we expect the power bank to carry a power check button, four to five LED charging indicators, and at least 2 USB charging ports.

What’s more exciting is the price tag that Xiaomi has fixed for the 20,000mAh Mi power bank. It only costs CNY 149 (approx $23.46), which places it in an extremely affordable segment. This new power bank should be able to provide at least 4 full charges to a smartphone, which means you can forget your charger at home with the new Mi power bank.