With an awesome camera, bigger screen, and many cool high-end features, Samsung Galaxy S7 is no doubt one of the best android Smartphones of 2016. Even though this set raised a storm in the Smartphone market but it is not free from flaws and till date many users have reported of facing several issues with their Galaxy S7.

The 10 most common Galaxy S7 problems and their fixes are here: 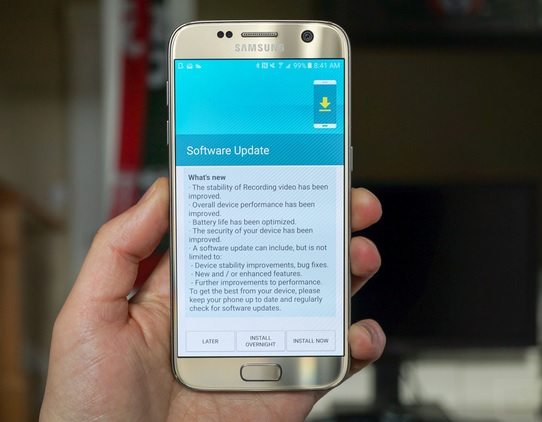 People from various parts of the world have complained that they are facing issue with Wi-Fi in their S7 where the internet speed is very slow, the connection gets dropped sometimes and it also gets disconnected very frequently. The fixes are here.

Briefing is a nice feature in Galaxy S7 and S7 Edge that is seen as you swipe left on the screen. This app collects information from various sources and now many users have complained that as they swipe on the home screen, what they experience is the slow performance and most probably briefing is the reason for that.

The best way is to turn off the briefing option that takes up space, consume battery along with slowing down the performance. Press on the blank spot on home screen and swipe left to get that app. Turn it off and your problem will be fixed.

App tray is not proper:

App tray is not in order, it is out of place and the recently installed apps are added to the back of the list are the most common complaint coming from Galaxy S7.

This is another most common issue faced by many Galaxy S7 users where they have complained that there is an issue with car audio or stereo system or else it is not connecting properly. This is not a big issue and can be easily fixed.

In most of the cases, it has been noticed that the issue got solved by software update.

The device that is trying to use Bluetooth is to be repaired by unpairing it. Also, in case any permission is appeared during this process ensure to set it allow while you can also check the permission control option available in settings and allow all the apps to access.

Next head towards Applications > Application Manager > More > Bluetooth share to force stop it, clear the cache and then turn off the Bluetooth. Turn it on back to see if the problem is fixed.

Galaxy S7 and S7 edge are made dust and water resistant but these are not actually waterproof. That is you can keep them under 5 ft water for long 30 minutes and the devices will be in the same condition as before. There are no flaps to cover the speakers or any other ports, so the speaker might not work 100% perfect till it is fully dried.

So, if your Galaxy S7 accidentally slips out of your hand in water then make sure it is fully dried especially its speaker and other ports before you start using it. There is a coating inside and a surface so, water will not get inside normally if the handset is not shaken or moved. But in cases water gets inside then you need to dry it out first to get back the same quality sound.

In case you notice that your phone is getting bit hot while charging then head towards Settings> Battery > Fast cable charging and turn off the option. This is actually Quick charge or Adaptive fast charging which will be turned off by doing so. That is the phone will not be charged 0-50% in just 25-30 minutes and it will take around 2 hours for that. Thus, the phone will not be hot while charging while it will also expand the battery life this way.

Along with many other interesting features ‘Always on display’ is another one that made many users happy. What happen here is the display remains always on and it never turns off. However, it does not eat more amount of battery as only some required pixels remains on so as to show you the needed information like battery, date, time and clock. Actually, this is not an issue and you can easily turn off or disable the option if you do not require it.

Head towards Settings to turn off this ‘Always on display’ feature. Settings > Display> Always On Display and Turn it off. That’s it.

Many users have received this notification so far that says ‘camera failed’. This handset is equipped with aa nice camera so if you are unable to have photos, it is really pathetic. Read out the fixes here:

Apart from the above, there are many other issues that many of the Galaxy S7 and S7 edge users have faced such as app crashing, screen glitches, rotation etc. and most of them can be fixed just by simply rebooting the device. Here is how to reboot the Galaxy S7:

Long press on the power button, next select the option restart and the device will be turned off once and will be restarted automatically.

There is another way to reset the device and it is helpful in case your device is frozen. This is hard reset, so press on the power and home buttons altogether for 10 seconds and the device will be restarted soon.

Factory data reset is considered as the last step in resolving any kind of issue in the galaxy devices be it small or software related. But this step will wipe the phone fully so, you are advised to take a backup of the phone and then go ahead with the process.

Follow the path Settings > Backup & reset > Factory data reset and Reset Device and it will first load the android screen followed by which the stock software will be flashed.

Despite all these issues, this is a really a great device to have that is loaded with many more useful features and Samsung will soon roll out the updates that will fix up most of the major and minor issues. So, do not be scared to own one.