Lenovo launched the A6000 Plus – an improved version of the A6000 smartphone in India at INR 7,499. The phone will be available via Flash sale on FlipKart and the first sale is scheduled on April 28th. The company has confirmed that there will be 1 lakh units of A6000 Plus on its first flash sale day. Registrations are already open since its launch day and are closing on April 27th, 11:59PM. 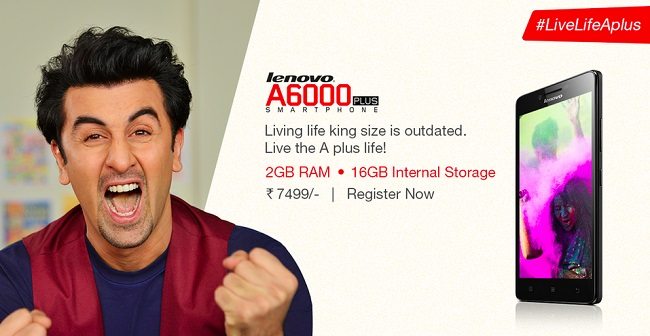 The Lenovo A6000 smartphone was also available through flash sale system and performed beyond expectations. It has already sold 3 lakh units in three months before it was temporarily stopped.

Lenovo has higher expectations from the latest phone and said –

The Lenovo A6000 plus packs a 2GB of RAM and 16GB of built-in memory compared to 1GB and 8GB available on the A6000. Other features are almost similar, including a 5 inch HD screen, Snapdragon 410 SoC with quad-core 1.2GHz processor and Adreno 306 GPU. It runs Android 4.4 (KitKat) OS with Vibe UI.